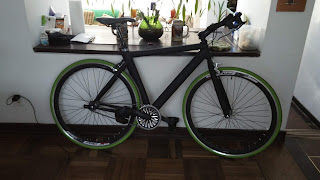 Well, I made the move permanently to Bogota Colombia. I shipped my bike ahead by cargo. It got there safely but was stolen from the house before I arrived. I was pissed about that especially after spending $130 dollars in shipping. Since I wasn't there I'm not sure how it went down, but apparently, a door was left unlocked.
Once I arrived I had to go looking for another bike. There are plenty of bike shops and a good selection of single speeds. I found a really good deal for $175 bucks which would have cost me at least $350 stateside. I will take a picture and post it shortly.
This is a cycling paradise! Closed bicycle routes throughout the city. Whether you want Road Riding, Mountain Riding, Fixie Riding or just plain commuting it's all here. That's maybe why three major tour races were won by Colombians recently including the Tour de France!
Posted by RHF at 2:07 PM No comments:
Newer Posts Older Posts Home
Subscribe to: Posts (Atom)