It Dosen't Get Better Than This!

Track stands at their best

I was listening to an interview with Lance Armstrong the other day. I was completely against what he did, but in that time period everyone was doping unfortunately. It pissed me off to the degree they went after him. We now have 7 years in the records with no winner of the Tour and the scandal took a huge chunk of the fan base away. People were disgusted with the whole thing.

They should have kept it out of the media. Going back after the fact just destroyed cycling. After that debacle I haven't watched a major race.

The Doping was so prevalent that I knew of riders on the local level who were doping. There are always going to be cheaters that's life.
Posted by RHF at 7:45 PM No comments:

My long term plan is to move to Colombia. Fell in love with the country. I like the idea of not needing a car. My expenses will be low and I can get anywhere on bike pretty much. Even toying with the idea of opening a fixie bike shop, but we'll see.

Either way I should be able to get a lot of riding in. With all the bicycle commuters there I thought a shop that concentrated on commuters and single speeds might be unique. I just don't want to be a slave to a shop again.

The beauty of Bogota is it's pretty flat, but surrounded by mountains. Santiago Chile was cool for riding as well. Just seems the traffic in South America is more used to bicycles, so they are more lenient and aware of you.

Colombia at least Bogota had a lot more bicycles in traffic. In fact I have never seen so many bicycles in my life. The only places that might compare would be Holland or Denmark.

My trip to Chile was on a Road Bike and I was just doing long distance and mountain climbs. I did the mountain in downtown Santiago where they have the Christ statue. I rode from Santiago to Vina del mar which was like 75 miles, I did another mountain Farallones and the toughest ride Portillo which is a ski resort. This was actually part of the Andes and separates Chile and Argentina.
Portillo Chile 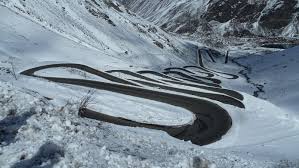 This was the road up the mountain 32 curves.
Posted by RHF at 8:41 PM No comments:

To Brake or not to brake

To use brakes or not use brakes is the big fixed gear debate. Originally fixed gear bikes were designed to be raced on a track where everyone is going the same direction at high speed. Brakes were not needed since there was no call for any quick braking. In fact any braking would be dangerous to the other riders who would not  time to to react to any quick braking.

The riders are tire to tire at full speed not enough time to react to quick braking, so track bikes were designed with no brakes.

Now when track bikes were ridden on the street a lot of purist did not believe in adding brakes. They chose to go around obstacles or skid stop. A skid stop is performed by locking up your rear wheel and skidding. Not a very efficient way to stop quickly and it wears the shit out of your tires.

I prefer a brake. One brake on the front wheel is all you need.  You can still apply pressure by pushing back on the pedals which will slow you down, but if you need to stop quickly a brake is the way to go.

Skid stopping puts a lot of pressure on you knees. I've got bad knees so I stay away from the skid stop.

The more you ride fixed the less you need to use the brakes. You just develop a keener sense for the road and since you are constantly pedaling you become one with the bike. Riding Fixed definitely makes you feel more in control..
Posted by RHF at 8:20 PM No comments:

Learning to Repair your Bike

The mechanics of a fixed gear are so simple there is no excuse not to work on your own bike. You should definitely know how to fix a flat. If you're on a ride and far from home and have a flat you better know how to fix it or you will have a long walk back.

All you need is a couple tire irons and a spare tube. A wrench to remove your wheels and a set of allen keys to tighten handlebars or seat post. A broken chain is rare and to fix it you would need a chain link tool which are small and easy to carry. All these tools and a tube can be carried under your seat in a small bag.

I always have an emergency bag under my seat since flats can be quite common. I have one of those all in one tool sets that has a full set of allen keys, a screw driver, a chain tool and a couple tire irons. this simple setup will cover most any mechanical problem I'm likely to have on the road.

Almost forgot you need a pump. either a simple hand pump or you can get one of those Co2 cartridge fillers which are easier to carry and work great..

If you don't know how to do a certain type of repair just search it on youtube and you will find plenty of videos showing you anything you want to know.
Posted by RHF at 8:11 PM No comments:

If you ever get the chance to ride on a velodrome take it. It is a super cool experience that will give you that much more appreciation for the fixed gear bicycle. Ft. Lauderdale had a track that I was able to enjoy. The steeped banks are intimidating at first but as you pick up speed it's a big thrill. You are horizontal to the ground and your speed is what keeps you up. Drafting fellow cyclist is easier because no one has brakes to dramatically change speeds.

Look up Velodromes and see if there is anything in your area. The coolest Velodrome I've seen was in Santiago Chile when I was visiting on a cycling trip. They had a motorcycle on the track pacing the riders. 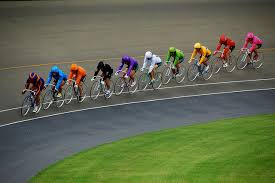 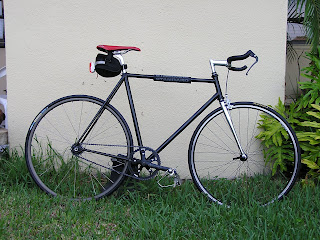 My second and still current bike. An old British track frame. I've since changed the wheels. 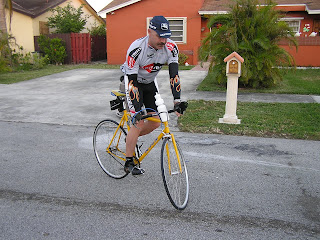 An old picture of my first fixie a KHS back when I was a sales rep.

You just can't beat a Fixie!

The beauty of the fixed gear is it's simplicity and it's price. There is very little to go wrong or adjust and you can get a decent bike starting at $300. I've had my fancy road bikes but there is always a special connection with my fixie.

I don't know if it's the simplicity or the feeling of the connection you have with the bike. The complete control of being able to balance in place or the feel of the direct drive.

The customization of each fixie street bike tends to show the riders uniqueness. Very rare a fixie rider keeps his bike stock. From adding or removing brakes, changing wheels, seats or handle bars or decals I guarantee 90% of those bikes had some kind of customization before they hit the streets. It's the Fixie Way!

My personal bike was an old British track frame. I powder coated it black. I added a Mavic front brake and Velo wheels. I cut my road bars to a bull horn, put on a Selle Italian seat and old school Campy pedals with toe clips. I've had top notch road bikes worth a lot more money, but I never held the attachment to them as I have with this old track bike.

Posted by RHF at 8:28 AM No comments:
Newer Posts Older Posts Home
Subscribe to: Posts (Atom)